Jersey Beat interview is clear : Montreal is the last gig with Peter Murphy !

Info from a fan and confirmed by 17 Relics : NIN were supposed to open for Peter Murphy but didn't show (much to the dismay of the crowd). A band called 17 Relics opened instead.

no setlist cause no show ! 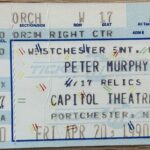